What is Seitan? How it Compares to Tofu and Tempeh 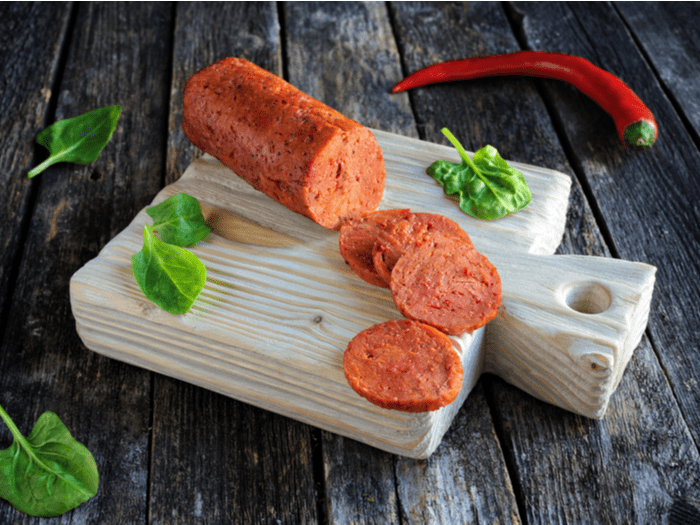 My editor, who is way cooler than me, has been hanging out on TikTok lately and says she is seeing lots of videos about cooking with seitan. Apparently, this meat substitute is having a bit of a moment. But plenty of people are still unfamiliar with this ingredient: What the heck is it, how does it stack up nutritionally, and how do you eat it?

Apparently, seitan is having a bit of a moment. But the food it refers to has been a staple in Asian cultures for at least 15 centuries.

Seitan is not a new thing. The word (pronounced say-tan) is Japanese and was coined just 50 years ago by one of the proponents of the macrobiotic diet. But the food it refers to has been a staple in Asian cultures for at least 15 centuries. I remember seeing it (but not buying it) at the Food Coop I belonged to as an undergraduate at Boston University. Although that was not quite 15 centuries ago, it was still long before the days of Whole Foods stores and yoga studios on every corner. Back then, food coops (and health food, in general) occupied a sort of a fringe culture left over from the Age of Aquarius.

Today, of course, plant-based and plant-forward diets have become relatively mainstream and you are much more likely to run across seitan at your local grocery store. It’s often next to the tofu or the plant-based meat alternatives. If your local grocery doesn’t carry it, seek out a health food store, food coop (yes, they still exist!), or Asian grocer. You can even make your own! (More about that in a moment.)

What is seitan made of?

Seitan is most frequently used as a meat substitute in vegetarian diets. It has a sort of stringy, chewy texture that makes it a fairly good substitute for meat. Unlike some meat substitutes, however, it’s actually a decent source of protein. But the source of the protein might surprise you.

Seitan is made from wheat gluten. Yes, you heard me correctly. This “health food” consists almost entirely of gluten: a substance a lot of people are going to great lengths to avoid these days. It’s made by rinsing wheat flour dough to dissolve and remove most of the starch and fiber. Eventually, what you have left is a sticky, elastic mass of protein.

Wheat as a source of protein

We tend to think of wheat and products made from wheat (such as bread and pasta) as “carbs.” However, people forget that wheat is around 15% protein, mostly in the form of gluten. A slice of wheat bread or serving of pasta contains about 5-10g of protein.

Among all the grains, wheat is actually one of the highest in protein. One unfortunate aspect of a lot of gluten-free products is that they are significantly lower in protein (and higher in carbohydrate) than the wheat-based products they are intended to replace.

A three-ounce serving of seitan will provide about 20 grams of protein, which is not too shabby for a plant-based protein.

But back to seitan. Historically, wheat gluten was a popular source of protein for Buddhists, who tend to be vegetarians. It became an important element of the macrobiotic diet, which dates from the 1930s, and continues to be popular with those following a plant-based diet.

Wheat gluten also turns up frequently as an ingredient in soy-based sausages, burgers, and other meat alternatives. If you’ve ever tried Tofurkey, for example (you remember that year in high school when you declared yourself to be a vegetarian and your Mom made you Tofurkey for Thanksgiving?), then you have had wheat gluten.

In terms of nutrition, a three-ounce serving of seitan will provide about 20 grams of protein, which is not too shabby for a plant-based protein.

Seitan is especially useful for those who, for whatever reason, cannot eat soy protein. But for obvious reasons, it would not be appropriate for anyone with celiac or another gluten sensitivity.

What’s the difference between seitan and tofu? Or for that matter seitan and tempeh? All three are excellent vegetarian protein sources. Here are how the three compare:

How to cook seitan

The stuff is quite versatile: it can be steamed, baked, rolled into noodles and boiled, or marinated and stir-fried.

With little flavor of its own, seitan readily picks up the flavor of whatever you’re cooking it with or in. If you want to try seitan in its more traditional guises, seek out an authentic Chinese restaurant or a macrobiotic cafe. You’ll also find a wide variety of pre-seasoned or marinated crumbles, strips, ribs, nuggets, or patties. Usually, all you have to do is heat it up.

With little flavor of its own, seitan readily picks up the flavor of whatever you’re cooking it with or in.

But if you’re in the mood for a project, you can actually make your own seitan. Over in the baking aisle, you’ll find an ingredient called vital wheat gluten. It looks like flour and it’s used in whole-grain bread baking to give those heavier flours a little lift. It’s also the raw ingredient in seitan.

I recently received a copy of a fascinating new cookbook by chef Skye Michael Conroy, in which he has recipes for using wheat gluten to make everything from plant-based salami to kielbasa to “ribz.”  It’s called Crafting Seitan: Creating Homemade Plant-Based Meats. This cookbook is definitely for the cook who enjoys somewhat complex and technical recipes. (You know who you are. If you’ve ever made your own Worcestershire sauce just for fun, you’re one of us.)

To give you a peek into the fascinating world of seitan cookery, Chef Conroy graciously agreed to let us share his recipe for pepperoni with you. If you try it, I want to see pictures! Post them on my Facebook page.

If you have a burning question, dilemma, or need to settle a nutrition-related bet with your roommate or spouse, drop me a line at nutrition@quickanddirtytips.com or come visit me on Facebook.

Why Weight Loss Is Harder for Some People

Does Boosting Your Meal Frequency Boost Your Metabolism?

What Is Iv Therapy For Weight...