The Numerous Healing Benefits and Properties of Shungite 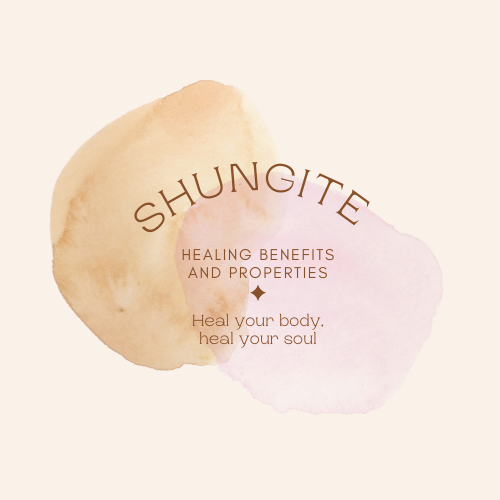 Over 50% of Americans use some form of alternative therapy, resulting in an 18 billion industry. In other words, a large number of people have turned to complementary and alternative medicine to combat chronic or incurable illnesses.

Little wonder. Most illnesses and diseases are treated with drugs that poison your system and destroy the body’s physical and spiritual balance.

Despite this growing trend, locating holistic solutions to traditional medicine is still incredibly frustrating for anyone seeking all-natural treatment choices.  This can be particularly disheartening for individuals who have allergic reactions to over-the-counter and prescription drugs.

DISCLAIMER: The Content is not intended to be a substitute for professional medical advice, diagnosis, or treatment. Always seek the advice of your physician or other qualified health providers with any questions you may have regarding a medical condition.

All things considered, it is easy to comprehend why medical tourism has grown exponentially in the past decade.  Desperate to find solutions that won’t leave them sick or filing for bankruptcy, many individuals battling autoimmune or chronic ailments have turned to meditation, yoga, deep breathing, and the use of crystal therapies to achieve wellness and balance.

On the crystal healing front, most find shugnite provides the best relief for a host of ailments.

Upon further investigation, you too may find that shungite crystal not only heals what ails you it might also keep you from getting sick in the future.

Yes! Centuries of use and hard to ignore results prove that shugnite crystal is beneficial to anyone exploring alternative or complementary medicine advantages.

What is the difference between the latter two approaches?

The therapeutic approach you use depends on your needs and the severity of your illness. In any case, shugnite, a rare but powerful dark stone, could be your best bet.

Like coal in its chemical composition, shugnite differentiates itself by an inability to burn as fuel.The crystal derives its name from its village of origin, Shunga, located northwest of Russia in Karelia. Found near Lake Onega, the unique stone houses 60 spherical yet hollow carbon atoms called fullerenes. These atoms, also called buckyballs, contain nearly every mineral on the periodic table.

Shugnite is also thought to be over 2 billion years old, which some believe contributes to its robust healing powers.

Not All Shugnite is Created Equal

You can readily find wellness centers that sell Shugnite, but be wary. Not all Shugnite is the same.  If you want a solid and pure sample, you’ll need to seek out the raw elite crystal instead of charcoal-like, regular shugnite.

Because elite shugnite is powerful, it can be more expensive than run-of-the-mill variants.  To ensure you purchase a quality stone, you will need to know what to look for.

What are the top five properties of Elite Shugnite?

The below table indicates the types of Shungite available for consumer purchase and what each grade looks like. 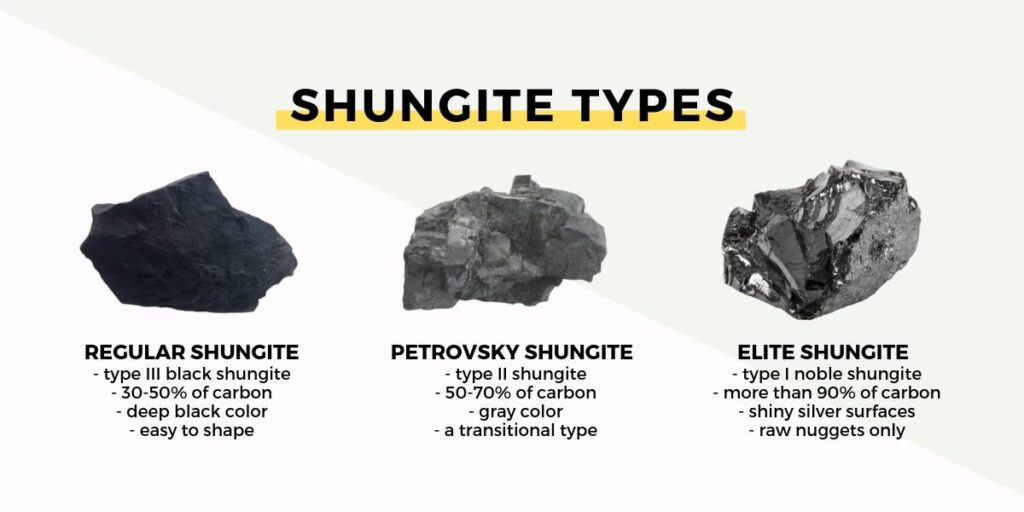 The use of shugnite is pagan in origin and has been used for its healing and purification properties for centuries.

Science has even taken note, with renewed interest in the stone culminating in a Nobel Prize in 1996.  Renowned scientists Harold W. Kroto, Richard E. Smalley, and Robert F. Curl won the prestigious award in chemistry upon discovering the spherical Fullerene inside shungite.

Until then, many believed that fullerene, a component of the carbon matrix, could only be created in a lab. This then astonishing revelation expanded the use and study of shugnite.

Concrete Reasons to Use Elite Shungite

To date, anyone can use the noble stone for a variety of reasons. Outside of a chemistry lab, shugnite is  most commonly used:

Shungite has long proven itself beneficial to the Russian military in its healing clinics and is utilized by farmers to enhance the growth of plants, vegetables, and cattle.

Proper Use of Shungite

When exploring healing stones and crystals, an individual must learn how to handle the crystal in question.

For instance, to unlock the healing properties of rose quartz, you must first cleanse it. Most pagan and alternative medicine practitioners do this by setting it out under the moonlight for a few days. Afterward, you are advised to wear it over your heart as a pendant on a metallic chain or leather cord.

As with rose quartz, it is also essential to cleanse your shungite before use.  Washing the stone under warm water for several minutes usually does the trick. You can also smudge it with sage.

When buying a shungite crystal, do your homework and, above all, trust your instincts. Only you know your goals and how best to employ a method that works for you and your household. 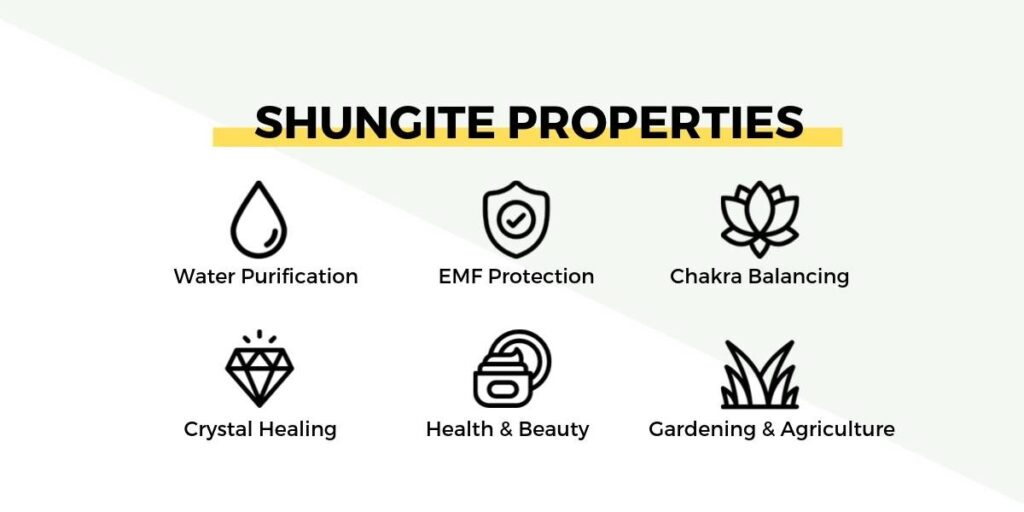 If you want to take a piece of protective shungite with you wherever you go, there are various ways to do so. One is to simply stuff a raw nugget into your pocket or purse.

People with PTSD, for example, may find easy access to the stone comforting when they need to ground themselves. Easy access in a pocket assists in finding the stone quickly, but it also increases the likelihood of it getting lost.

Elite shungite is expensive, so purchasing it as a crystal wearable, especially if needed for emotional well-being or stability, is likely sound.

Shungite can be worn in a way that is both fashionable and effective. Top wearable forms of the crystal include, but are not limited to:

A few health-and-wellness stores offer shungite anklets and infused ankle pads for people who suffer from inflammation or sports injury pain. Whatever you’re on the hunt for, you are bound to find it with a bit of effort and research.

Several holistic companies, online and off, claim to offer genuine shungite, but not every seller is legit. Before investing in a piece of shungite jewelry, ask yourself the following questions:

Investigating your options should ferret out the best shungite items available on the market.

Continued Use of Shungite

Once you feel the transformative and healing power of shungite, it will become your favorite healing crystal. This may lead to expanding your collection so that the stone continues to have a measured impact on your health and well-being.

There are several ways in which you can increase your shungite selections as you move forward.

Skeptics become believers once they turn to crystals for healing.  It’s your body, mind, and spirit, so take care of it the best way you know how. The first step begins with finding the best elite shugnite to meet your needs.

Q: What is Shungite?

A:  A rare, charcoal black stone that, in its elite form, primarily consists of carbon. Some types of shungite are made up of 99 % carbon. The material curiously contains almost all the minerals on the periodic table.

Q: Where does shungite come from?

The exact origin of shungite is unknown, but theories abound, including the idea that it came from a meteorite that hit the planet.  What scientists have been able to surmise is that it predates humans and has been around for over 2 billion years. The stone can only be found in Karelia, Russia, in the village of Shunga.

Q: What is elite shungite, and is it different from regular shungite?

You betcha.  Regular shungite offers limited protections, is impure, and is only made up of 30-50 percent carbon. Elite or Noble Shungite is far more powerful, purifies drinking water, and, as mentioned earlier, is made up of 98-99% carbon. Elite (Type I shungite) also has antibacterial properties the Type II and III versions do not possess.

In its purest form, yes, noble shungite can be a bit pricey.  As the adage goes, you get what you pay for. If you genuinely want to benefit from the elite shungite provides, you will invest in this rare and powerful stone.

Did you like this article? Check our similar posts:
Banana Milk: What It Is, Health Benefits, Downsides, How To Make It & FAQs

Quit Getting Duped By This Common Multivitamin Myth, A Nutrition PhD Explains

What Type Of Bread Is Good...

Can You Freeze Silken Tofu